Scottish acting legend, James Cosmo, has spoken of the “magical quality” of films shot in Scotland as VisitScotland launches its new-look guide to big screen locations.

The star of iconic Scottish films, Highlander, Braveheart and Trainspotting, and TV fantasy series, Game of Thrones, pens the foreword to the national tourism organisation’s revamped guidebook, Set in Scotland.

The 52-page guide features more than 150 films which have been shot entirely or partially in Scotland – 46 more than the previous version first published in 2015 – and details more than 100 film locations. It is available in VisitScotland iCentres across the country and can be downloaded from visitscotland.com.

Set in Scotland was launched by James Cosmo at Bo’ness & Kinneil Railway, which runs steam and heritage diesel train journeys along its tracks, and has appeared in several film and TV productions including Outlander, Cloud Atlas and The Railway Man. The heritage railway is operated by volunteers of the Scottish Railway Preservation Society, along with the Museum of Scottish Railways, Scotland’s largest railway museum which is also on the site.

Screen tourism – or set-jetting – is a global trend in which film or TV fans are inspired to visit a location after seeing it on screen. It comes in the form of visiting the exact filming location or providing the general motivation to book a holiday to the destination.

The trend is long-term, with many visitors citing film titles released long before their trip as motivation, and so can provide ongoing financial support to the regions and businesses linked to popular locations.

VisitScotland hopes the new-look guide will offer further inspiration for visitors to explore across the regions, while providing a resource for the industry to create new experiences as part of Scotland's national strategy to rebuild the visitor economy and ensure sustainable tourism thrives.

Previous research has shown that 17% of visitors from Scotland’s top international markets (USA, France and Germany) visit a film or TV location while on holiday in Scotland, while a recent Screen Scotland report valued screen tourism at £55 million to the national economy, based on those visiting film and TV locations, creating 1220 full-time jobs.

To date, Scotland has appeared in five of the top 30 highest grossing films of all time, which have brought in a total of $10.6 billion* at the box office worldwide. Among them are Avengers: Infinity War and Avengers: Endgame, which showed off Edinburgh’s gothic architecture and the quaint fishing village of St Abbs, respectively.

Actor James Cosmo, whose film career has spanned six decades, writes in the foreword:“Throughout my career I have been privileged enough to be involved in many [films] that have made a real connection with audiences worldwide. People still come up to me while in Scotland and tell me they are here because they watched Scottish films such as Braveheart or Highlander. And what is wonderful, is that the films are only the starting point. They then form a strong connection with the real country – it may be because of their ancestors or the feeling they get while they’re here. That stays with them.”

Jenni Steele, Film and Creative Industries Manager at VisitScotland, said:“James Cosmo has been a major presence in some of Scotland’s most iconic films and it is a pleasure to have him introduce the guide and encourage film fans to make a real connection with Scotland.

Some of the world’s biggest film franchises have chosen to come to our shores in recent years, from Batman to Avengers. This not only boosts the local economy in the short-term, which is particularly important for the recovery of tourism, but can provide an ongoing presence in popular culture – and streaming services – that can continue to reach new audiences and lead to visits long after a film’s release.

“As we celebrate Scotland’s Year of Stories, our new-look Set in Scotland will hopefully inspire visitors to explore far beyond the film sets, and experience the people, the places, the history and culture, that have inspired many big screen storytellers.”

Amanda Kilburn, Business Development Director at the Bo’ness & Kinneil Railway, said: “Being a location for many TV and film productions is a real privilege for us. We are fortunate to have such a photogenic site located within easy reach of Edinburgh and Glasgow with the added attraction of being able to give sole use of our line and site to production companies. Our fantastic collection of railway items including steam locomotives, historic carriages and much of the infrastructure required by these companies, has been recognised through the Scottish Government Recognition Scheme as being of national significance. It's a real thrill for our volunteers and staff to see the place they have been passionately building from a brownfield site on the edge of the Firth of Forth since 1979 on the big screen.

"Another great aspect of being a film location is that it brings us visitors that may not have come ‘just to see the trains’. Our Station Master has shown many visitors the exact spot that Claire and Frank bid farewell to each other in Outlander or talked about the footbridge and how it was used in The Railway Man. It is a great morale booster for our volunteers too, whom we rely on for survival, to say their railway has been in so many films and TV programmes.

"We work hard to plan these projects with Location Managers and have a great relationship with film crews, many of which have worked with us numerous times and given us the ‘Film Crew Friendly’ badge. Our Railway and Museum are run almost entirely by volunteers of the Scottish Railway Preservation Society (SRPS) which is a Scottish charity, and all income helps fund the restoration and preservation of Scotland’s railway heritage, so we are extra grateful to be able to receive the financial support the TV and film productions bring.”

Councillor Paul Garner, Economic Development Portfolio Holder at Falkirk Council, said: "The launch of this revamped film locations guide, Set in Scotland, is to be applauded.

"The Falkirk area’s starring role in movie and TV film hits such as Outlaw King, World War Z, and Outlander, using the area’s unique and fantastic heritage locations, continues to inspire visitor interest from throughout the UK and aboard from those keen to chase the movie and television production magic.

It is fitting the launch is at Bo’ness and Kinneil Railway which has been used many times in productions with Bo’ness also the home to Scotland’s oldest purpose-built cinema, the Hippodome. Set in Scotland will continue to highlight incredible places within Scotland which the Falkirk area is pleased to play its important part and reach out to a different market bringing in more visitors to Scotland.”

Set in Scotland covers the last 90 years, from Alfred Hitchcock’s 1935 version of The 39 Steps, in which UNESCO World Heritage Site, The Forth Bridge, appears, to The Road Dance, which was filmed on the Isle of Lewis in the Outer Hebrides during the pandemic and released in May this year. Alien, Avengers, Batman, Fast & Furious, and James Bond, are among the global film franchises to have come to Scotland.

As part of the redesign, the guide labels each film by genre, features QR codes with links to film themed content on visitscotland.com, and contains a new section, Monarchs of the Glens, which focuses on those films linked to Scotland’s kings and queens, from Shakespeare’s Macbeth to the Oscar-winning The Queen.

For more on screen tourism and to download Set in Scotland: www.visitscotland.com/film 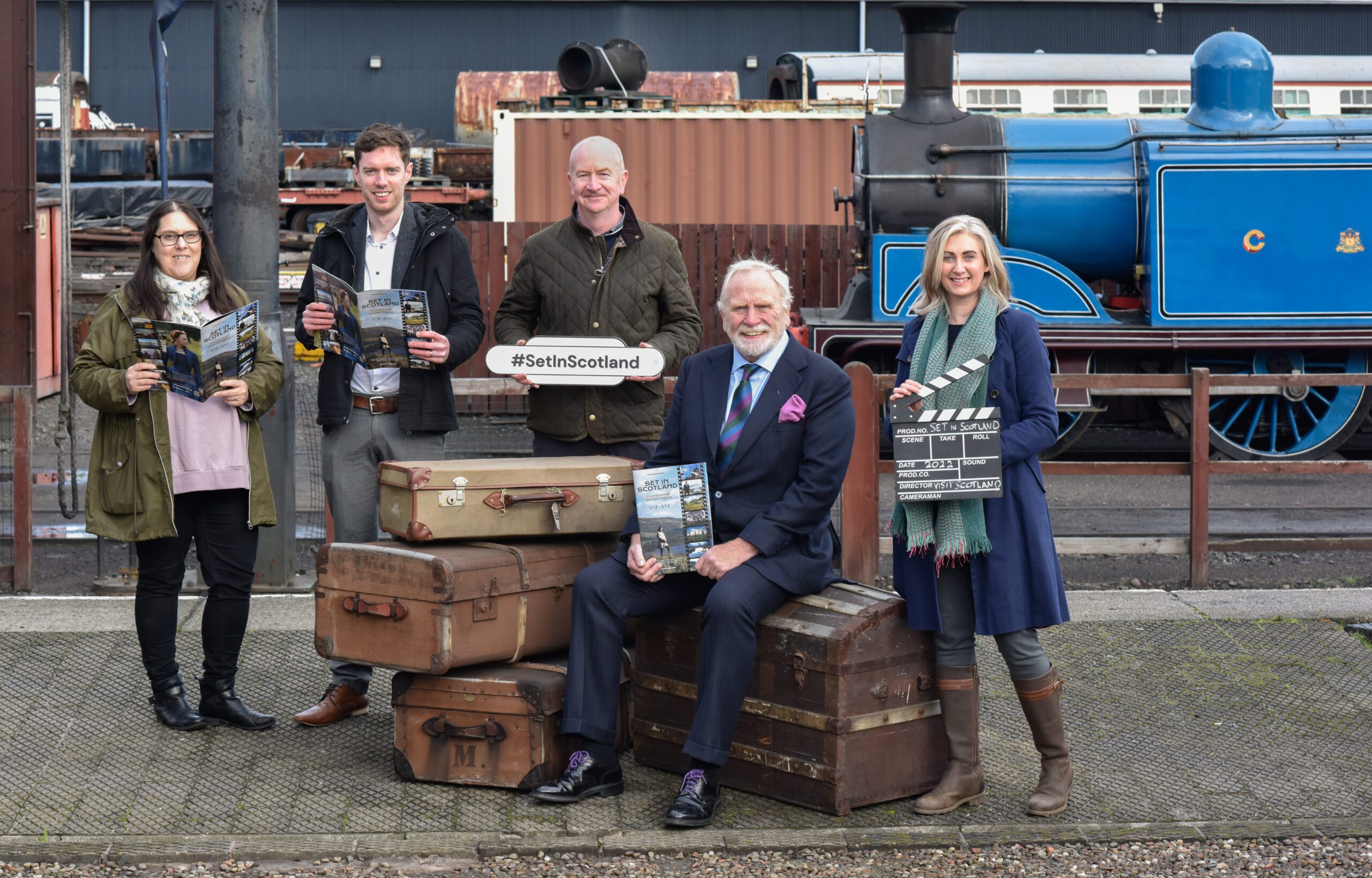