A new Coastal Haar gin has been launched inspired by the East Neuk of Fife and including botanicals foraged from its rugged shoreline.

The new limited edition flavour, which has been created by Darnley’s Gin, features nine botanicals and is infused with elements of sea buckthorn and sugar kelp which have been locally and sustainably foraged with help from Jayson Byles of East Neuk Seaweed.

Coastal Haar marks the fourth release in the Cottage Series which tells the story of the people, the landscape and botanicals sourced in Fife where Darnley’s Gin is handcrafted.

Scott Gowans, the brand’s gin distiller, has created each gin in the Cottage Series. Having worked previously at large breweries, he developed a love for crafting new flavour profiles.

Scott, whose family hail from nearby Crail, said: “My idea behind this flavour of London Dry Gin came from the unpredictable summers that we experience in the East Neuk.

“One minute you will be relishing in the beauty of the coastline while the next, the haar – a cold fog that accumulates over the sea - will be rolling in with a strong breeze. I wanted the new flavour of gin to be reminiscent of this full sensory experience.

“I tried to capture the feeling of this typical summer’s day in Scotland by creating a gin using local sea buckthorn which has subtle tropical fruit notes, supported by our cottage garden grown lemon balm and marigold petals.”

The botanicals that feature in Darnley’s gins are homegrown at the brand’s Gin Cottage gardens. What can’t be grown, will be foraged with the help of local experts or sourced sustainably from trusted farmers.

Scott continued: “For me, the best part about creating Coastal Harr was working with Jayson at East Neuk Seaweed, an initiative which aims to reduce people’s environmental impact by encouraging them to eat wild, locally produced and seasonal foods.

“Jayson sustainably forages sugar kelp from the Fife coastline with the purpose of using it for wild cooking.

“We were lucky enough to use his harvest to infuse the gin using a vapour basket, creating a beautiful sea salt breeze undertone.

“We really do believe that this gin is a rare expression of the heart and soul of our coastline and depicts the essence of Fife perfectly.”

The limited-edition gin is now available for sale in at the brand’s visitor centre at Kingsbarns Distillery or via its online shop, with just under 2400 bottles produced.

Darnley’s Gin, a part of the Wemyss Family Spirits family, prides itself on being a natural gin maker. The brand now produces and sells three classic gins – Original, Spiced and Navy Strength Spiced – along with its limited-edition series.

To find out more about Darnley’s Gin and to purchase Coastal Harr, visit darnleysgin.com

To find out more about Wemyss Family Spirits, visit wemyssfamilyspirits.com 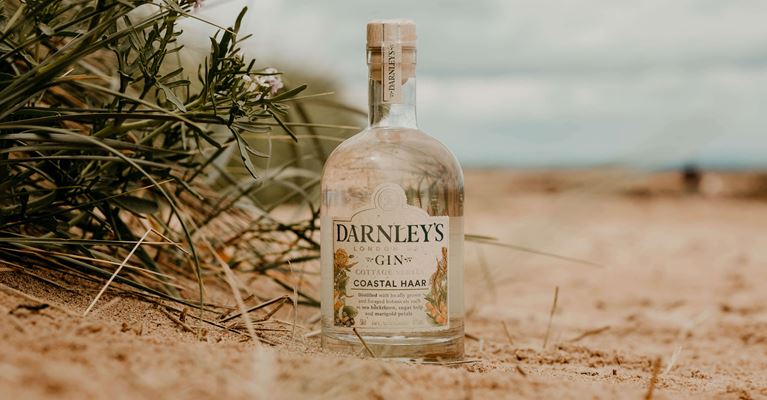